In the spring and during certain climatic events, radio waves can travel long distances due to an atmospheric phenomenon called Tropospheric Ducting.  To quote Amateur Radio Wiki.net:

The troposphere is the layer of atmosphere closest to earth.  It is approximately 10km deep on average, but can extend to 20km in tropical areas.

Tropospheric propagation occurs when signals are reflected scattered or refracted in the troposphere. “Ducting” effects occur primarily because of temperature inversions at a height of between 500m and 1500m, and occasionally up to 3000m. Such inversions are not caused by local “weather” or terrain, but rather by climatic conditions such as frontal boundaries. Temperature inversions are usually layers rather than sharp lines separating regions of different temperature.

As Chief Engineer for WXYC 89.3 FM in Chapel Hill, NC, I am sometimes called to address a listener’s concerns about WXYC being interfered with by other more remote stations.  Here is one such email from a listener (renamed Listener X to protect their identity!):

>>…I wanted to let you know that I am getting considerable broadcast interference from
>>PRE stations in the morning, while listening in my car along the NC HWY 70 corridor
>> between Hillsborough and Durham.  This is to the extent where I hear largely PRE
>>with occasional bursts of WXYC.  It breaks my heart!  Can you do anything about this?
>>Probably fruitless, but thought it worth mentioning.
>>
>>Please keep being awesome.
>>
>>Best,
>>Listener X

I may be WXYC’s engineer, but I am also a long-time listener and DJ there as well, and I agree that the WXYC programming is awesome!

The location you note having difficulty receiving WXYC is unfortunately one where our antenna pattern has a null to protect WXDU’s signal, in addition to being fairly far from our Chatham transmitter site: 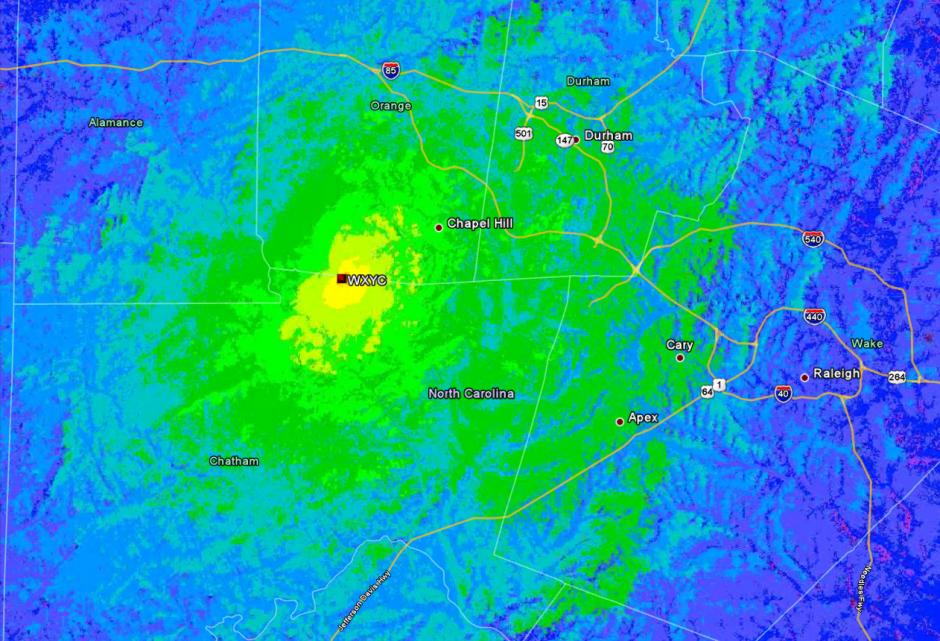 The interference you mention is a seasonal occurrence, due to heat stratification of the atmosphere.  This happens, especially in the South-eastern US, as summer heat and humidity create a strong layering with large temperature differentials at the layer boundaries.  Radio signals can be reflected by the layer boundary in a phenomenon called ‘Tropospheric Ducting.’    It often happens in the spring, due to the extreme cold aloft, but can happen in the summer due to high heat indices as well.

The station you most likely heard walking over WXYC’s signal was WTEB in New Bern, NC.  They are an NPR affiliate, and over the years I have contacted their engineer about this issue.  Strangely enough, they have fringe-area listeners who can be interfered by WXYC as well, although given that WTEB is 100,000 watts and WXYC is 1200 watts, we take more interference than we give.

Here are a few posts from the Public Radio Engineering list of others observing this phenomenon at various times:

There is a site maintained by radio amateurs in Minnesota which gives real-time maps of tropospheric ducting:

Below is an example of this map, saved from a day in 2010 which had severe ducting: 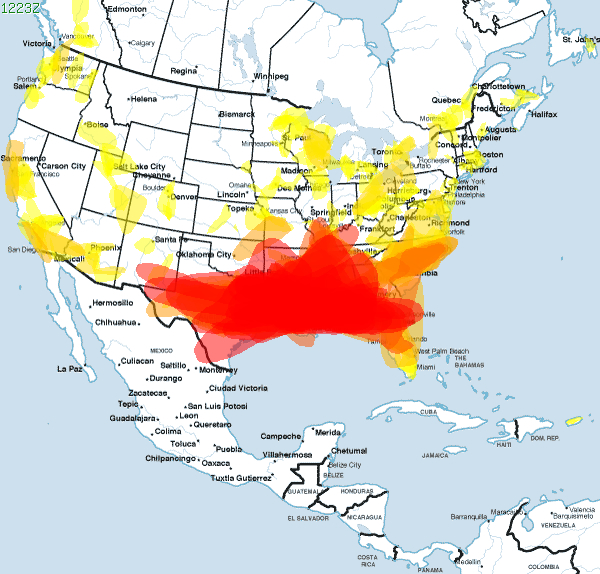 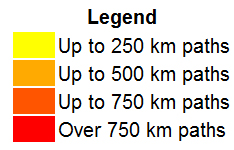 Radio is an amazing and useful medium!

Thank you for your support of WXYC, and best wishes!