So like many of you I needed a convenient way to provide power when using my KX2 or KX3 portable.  Yes, they have internal batteries, but those power sources only provide limited power output and run time.  In addition I wanted to be able to utilize photo-voltaic (PV) panel output to charge the battery.

After weighing the options and giving a heavy bias to safety and reliability I decided to go with a Bioenno 20Ah LiFePO4 battery:

I also decided to purchase their MPPT-20 solar charger.  I already had a Coleman 30 W 12 V (nominal) PV panel which came with it’s own charger, and the RFI generated by that charger was unacceptable.   I spoke with Bioenno and they indicated the MPPT-20 solar charger was designed to be RFI-quiet.  The Bioenno MPPT charger has an integrated power path controller with overload protection:

For instrumentation I already had a Astro Flight Inc. Super Whattmeter that measures V, A, W and Ah:

One nice aspect of the Astroflight Super Whattmeter is it’s low quiescent current consumption of 4.5 mA.  It has no power-consuming backlight constantly on which is not needed when operating.  The Powerwerx unit, while very useful constantly draws 10-12 mA, >2 times as much.  One thing you become very sensitive to when running from batteries is unnecessary power usage!

In order to make the system as convenient and easy to set up as possible I re-purposed a microphone carry case I already owned and mounted all of the components in and on it.  One virtue it had compared to a Pelican case was flat sides on which to mount the various jacks and LCD display.  The other (and main) virtue was I already owned it…and it was no longer being used for it’s original purpose.  As a ham I am fond of re-purposing existing parts!

While reviewing many ready-to-go PV panels, I noticed they usually come with an SAE 2-pin connector attached like the Coleman I owned: 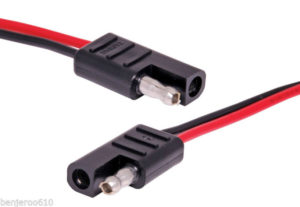 I decided to mount a mating connector on the box for ease of connection. There are a number of reasons and advantages to use of this connector:
1) Many commodity 12V “charger” PV panels come with this plug.
2) It has reasonably low contact resistance.
3) It is semi-weatherproof which is important since by definition a PV panel is outside and extension cables if used will place the connector in the weather.
4) It is not mateable with Anderson PowerPoles, so  there is no possibility of accidentally plugging a PV panel directly into a load.  This is critical, many PV panels when fully insolated will output over 20 V, potentially damaging ham rigs!

In addition I mounted a dual PowerPole jack and dual 5 V USB convenience outlet for powering and charging 5V devices.  I mounted the Bioenno MPPT charger on the outside of the case, since it has a heatsink and I didn’t want the unit to overheat.  Once all the components were installed there was enough space to store the 120V Bioenno charger in the case which was very convenient.

I was intent on making sure this system was absolutely RF quiet.  What I have learned as a ham and power supply designer is much of what is thought of as radiated RFI from a device is actually due to common-mode currents.  These are most likely to appear due to antenna imbalances, and this can happen with end-fed antenna systems such as those used when portable.  In order to break any potential common-mode current paths I installed some large Fair-Rite mix 31 Snap-It cores on the PV and load wires.

So what I ended up with was good enough to power an Elecraft K3 at the 5W level along with an Asus Transformer T100 laptop for an entire Field Day in 2016.  Of course it was very sunny all weekend, so YMMV!

Here is a gallery of picture of the completed PAE PowerPak: 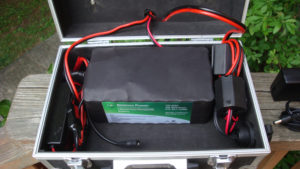 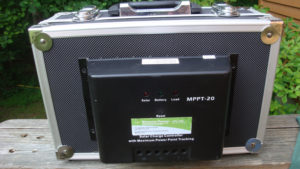 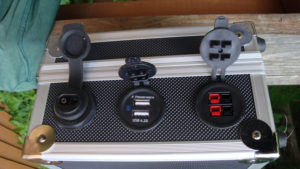 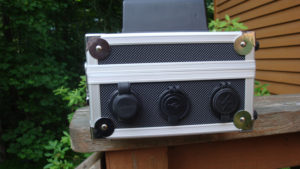 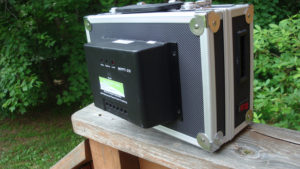 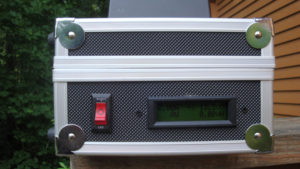 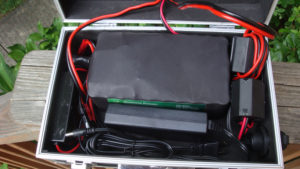