There are a lot of factors which determine what battery chemistry is best for any specific purpose.  At this point I thought it may be beneficial to post our experience with Lithium batteries.

I totally understand and encourage people wanting to experiment with inexpensive batteries, that is part of being a ham and I’m proud to say I do the same.  Please do not consider this post a condemnation of experimentation with any battery.

After having stated this, I would like to discuss issues affecting quality and pricing.  I have an issue with the many comparisons between the usage of Li cells in phones and inexpensive Li cell usage elsewhere.  I’ve been specifying and experimenting with Li batteries for a few years as an OEM, and by now there are at least a hundred Li cell manufacturers in China, many concentrated around Shenzhen: http://www.tradesparq.com/catalog/all/Lithium-Ion-Battery-manufacturers.  There are also numerous others in other countries.  If you want a taste of what we find trying to qualify battery vendors, please read this paper: http://www.mpoweruk.com/china_batteries.pdf , our experience has been similar.  There are several different Li chemistries, each with specific attributes and applications.  If this subject interests you here is a good resource: http://batteryuniversity.com/learn/article/types_of_lithium_ion

I thought I would share some of my own experience:

The lithium battery issue comes down to these main factors: Price, Performance and Safety.

Price: When Li cells are made by the high quality manufacturers (LG, Panasonic, NEC, Samsung, GS-Yuasa, Hitachi, BAK…) they are graded for EDR (Electrochemical Dynamic Response), impedance and capacity, and most of the premium so called A-grade cells go to major OEMs like Apple, Samsung, Tesla, and laptop OEMs.  (FYI-there is no official grading system, just internal QC standards, different for each company)  The balance of A-grade are sold at a premium into the smaller markets, and B-grade cells are sold at lower prices yet are a decent value since they were made using quality production methods and materials.  These are not to be confused with the lower tiers of manufacturers who make poor quality batteries and whose prices are lower still by up to 80% (did you read the “china_batteries.pdf” linked above?).  Needless to say, one company’s A-grade are not necessarily similar to another.  Since each cell is tested and graded by the manufacturer and a corresponding price assigned to optimize their profit, you are never going to get an A-grade cell from a good manufacturer cheap.  Period.  Whether you choose to believe it or not, these companies are in business to make money, not give hobbyists their best cells cheap.  If the cell is inexpensive it is a lower grade or from a lower quality manufacturer, period.

Performance: The OEM batteries in phones, cameras etc. are A-grade, and  are often held up as examples of how good Li can be.  The cheapest tier of batteries found on eBay and others should not be included in this comparison for obvious reasons: they are most likely not made in the same manner by reputable manufacturers.

Safety: People also refer to the reliability of Li batteries in phones, cameras etc. when espousing their use in ham rigs.  Once again, this reliability and safety record only applies to A-grade from top manufacturers.  In addition to superior separator technology their cells incorporate a one-time fusable current limiter in the case of extreme overcurrent, a resettable polyswitch for moderate  overcurrent and an adequate overpressure vent to inhibit explosions.  These features add cost, so many of the lower grades do not incorporate them, and as a result have suffered reliability and safety issues (exploding hoverboards which then catch houses on fire ring a bell?), so a comparison between many of the cheapest eBay Li batteries and the ones specified by major name OEMs is invalid.  Read the RC blogs for further info about this issue.

For operating valuable equipment like HF transceivers I would highly recommend people use either packs made from reputable cell manufacturers with quality BMSs (Battery Management Systems) or switch to quality LiFePO4 cells which in general are safer and more tolerant of conditions such as storage at full charge.

Although I have not tested every battery pack on the market, I’ve analyzed the performance of a few and would like to add a few caveats to their ratings ratings:

1) Although the cell itself may have a certain rating printed on it, that is often very optimistic, and if not the rating may be at 90% or more discharge.  In many cases the low-voltage protection disconnects the cell before the rated AH can be delivered, which is a good thing for cell life.  In my experience this results in a 8 Ah marked battery which will deliver 5 Ah or less before cutoff, perhaps much less.

2) For batteries with 3 Li cells in series, the voltage under a moderate load will be in the 10.8 V range, not 12 V which may be a problem for some rigs.  The 4-series cell LiFePO4 packs deliver about 12.8 V under moderate load which gives extra voltage headroom allowing the PA (Power Amplifier) to achieve low IMD (Inter Modulation Distortion) at higher powers.

3) Most inexpensive packs which have parallel strings internally do not have individual parallel charge balancers due to the cost.  This often results in a cumulative degradation of capacity as some cells stay undercharged.

4) On the subject of BMSs; many less expensive battery assemblers use generic BMSs which are not calibrated for the exact cells being used.  The differing cell chemistries (read the link “types_of_lithium_ion” above) have different voltages and charge/discharge curves.  This can have many ramifications from under or overcharging to allowing an over discharge current which can damage the cells, or conversely limit the overall output and under-utilize the cell.  The only way to know this is to perform individual cell testing and then verify the BMS is appropriate.

5) Many batteries and packs from China and perhaps elsewhere are marketed as genuine and stamped with brand names but are in fact fakes.  We purchased 20 Ah prismatic LiFePO4  cells from several sources, all which claimed they were genuine A123 Systems brand cells: 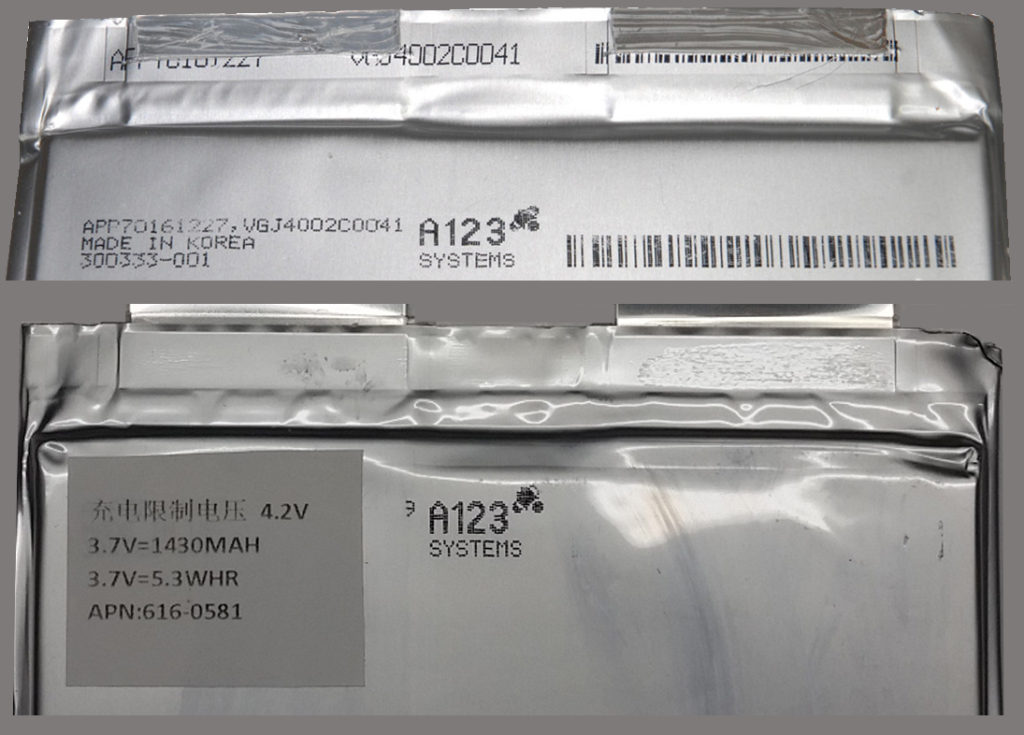 The difference in appearance was immediately obvious between several of them, and even a few which were apparently genuine tested poorly, as if they were rejects from a real A123 production line.  Only the cells purchased at the highest price from A123’s authorized dealer looked brand-new and tested at or above spec.  Surprise: if a price looks too good to be true, it is.

For all of these reasons when a USA customer wants reliability and guaranteed performance I really only feel comfortable recommending batteries supported in the US by reputable integrators like Tenergy and Bioenno, and a few others.  Their ratings are honest and conservative and they utilize A-grade cells and appropriate BMSs.  For many applications I prefer LiFePO4 chemistry cells which are more stable and tolerant of conditions than other Li variants albeit at slightly less energy per pound.  As an example, the pack I brought to Field Day (FD) was the Bioenno 5.5 lb., 20 Ah/240 Wh which in my testing actually delivered over 250 Wh @ ~13>12.3 V at a 2 A rate without any switcher to generate RFI.  Along with a 20 W PV (Photo-Voltaic) panel and charger (and sunny wx!) it will run a KX3 at 5 W all FD.  Bioenno also makes smaller packs which all feature internal balancing and protection.  I am not financially associated with the company, I just appreciate quality and honesty as well as their being based in the US and having excellent service and someone knowledgeable answering the phone.  Tenergy is another battery integrator which has an excellent track record and uses quality cells and BMSs, although even they have had notable BMS defect issues with the 3-cell packs sold for KX2 use.  Like Bioenno they are not cheap, but you cannot make a good battery pack without using high quality cells and BMSs which have been designed for the exact cells they are being used with. period!

For the same reason you bought Elecraft, Icom or other quality rig for a premium price, if you are looking for a reliable, robust battery, you buy quality once and never look back…and in saying this I am not being elitist, let me reiterate: if you are just buying your battery for casual experimentation and do not expect a lot from it and will not need to rely on it, there are a lot of cheap batteries available and with some compromises and care you can learn a lot and have a lot of fun!  I recently purchased an inexpensive jump-start battery which worked…once.  Failure analysis showed one of the batteries internally had opened up.  So, as always, caveat emptor!

In part II of this blog we will reveal some test results on popular battery packs recommended by readers.