I wanted to share my NPOTA Activation experience which I am calling:

I had been planning an NPOTA activation for a few months with my newly-licensed daughter Sarah – KM4WHL, but due to her work schedule and mine it was a tough thing to pull together.  As December drew to a close we realized we just needed to activate the closest National Park unit to each of us, and that turned out to be Moore’s Creek National Battlefield, BF07.

On December 30 we each headed to Moore’s Creek, a 2-1/2 hour drive for me.  I packed my portable power unit with a Bioenno 20AH LiFePO4 battery, my trusty KX3, and the versatile Buddipole which I had accessorized to where it could be configured either as a vertical or dipole.  I arrived early, checked in with the park ranger, and was delighted when he began to serenade me with his bagpipe practice while I set up.  I unpacked the Buddipole and after frantically searching for a few minutes I soon realized I had somehow left the center section at home, rendering it useless. (note to self: actually set up and use portable antennas each time before leaving!!) This left us without an antenna and I started to panic, and about that time my daughter drove up, so we got the ranger to take a picture of us for proof of location: 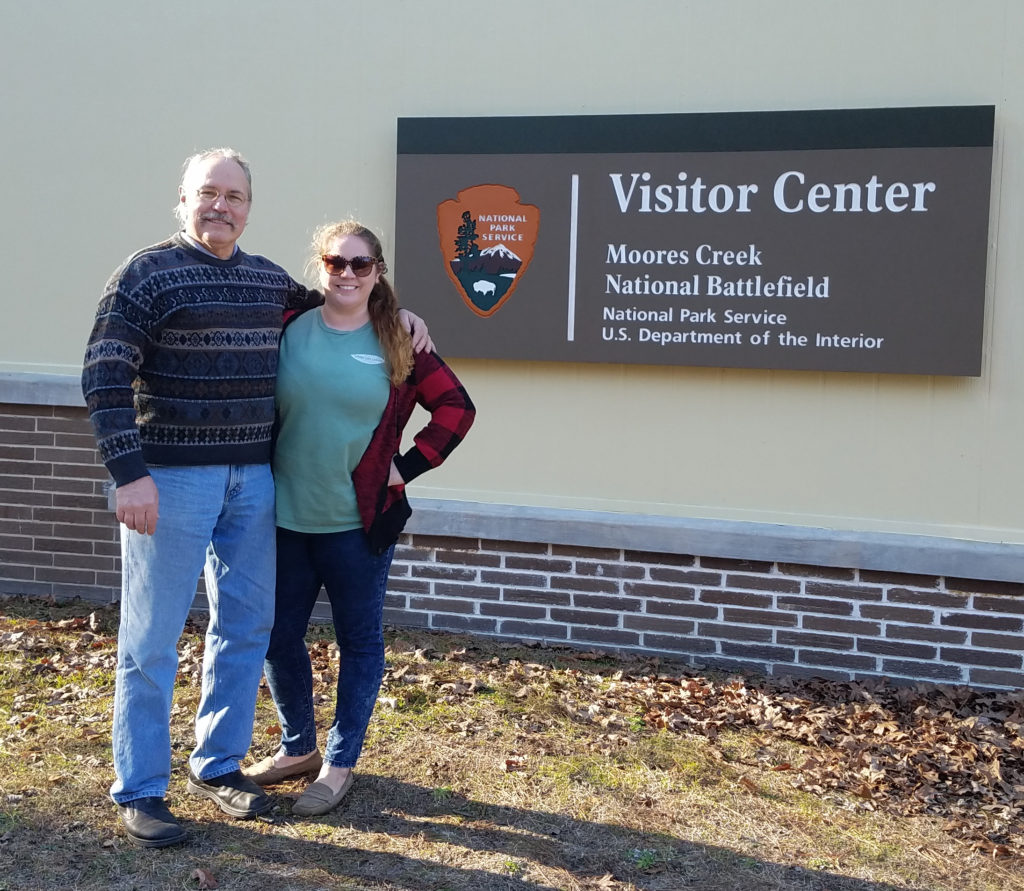 Returning to the picnic site I frantically searched my car for usable wire and discovered my 25′ 12V drop light, and the more I looked at it, the more it looked like a vertical antenna to me.  I threw the light cage end into a tree and it got caught about 30′ up in the branches: 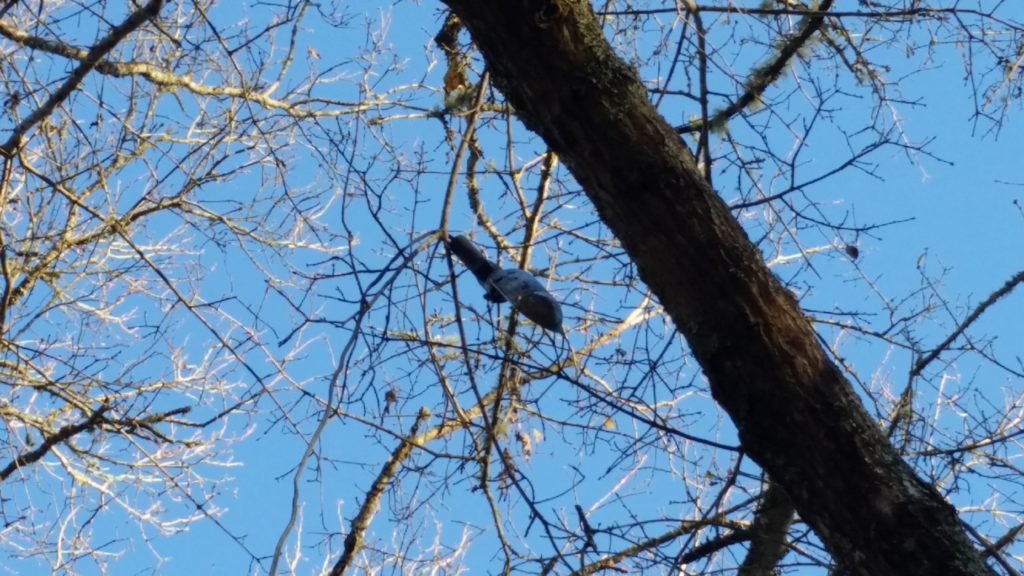 It was conveniently equipped with crocodile clips at the other end of the wire, so I clipped them to the center of the PL259 on the feedline: 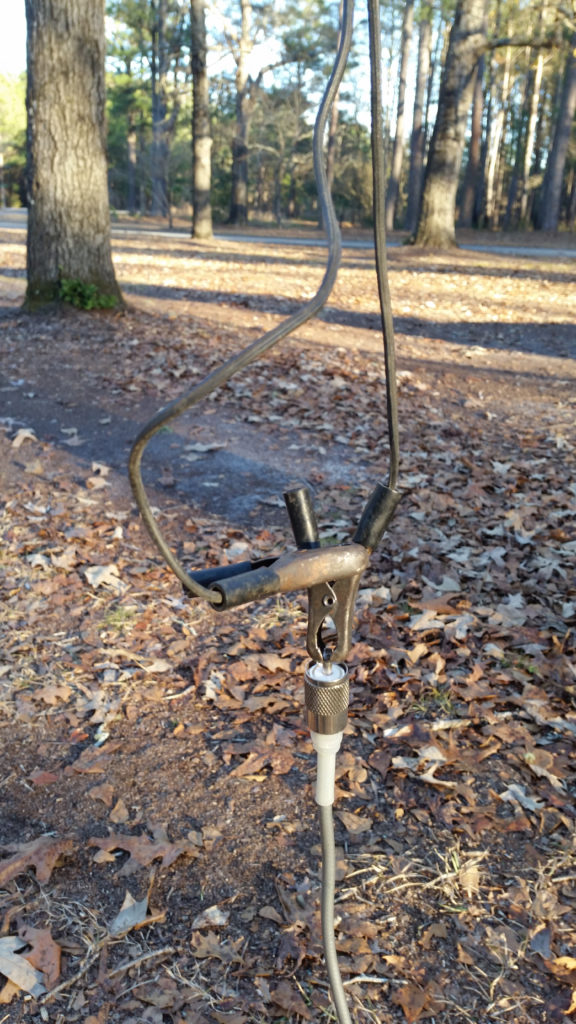 I knew that in order to use the outside of the feedline shield as a counterpoise I would have to choke it, so I took one of the Fair-Rite mix 31 Snap-Its out of the power supply (only needed when the MPPT solar charger was active).  I calculated a 20M SSB 1/4 wave radial would be 17 ft or so, so I wound a choke at that point down the feedline: 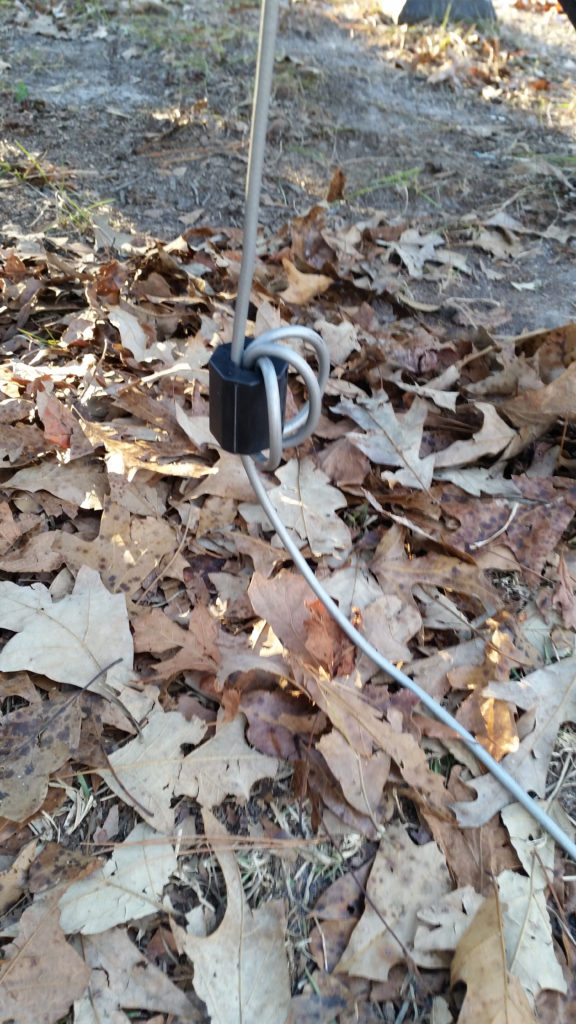 I powered up the KX3, and hit “ATU TUNE” and in a second matched it 1.2:1!  We were in business!  We called CQ for about five minutes until we were spotted and then the fun began, with a pileup rapidly developing, the first Sarah had ever handled: 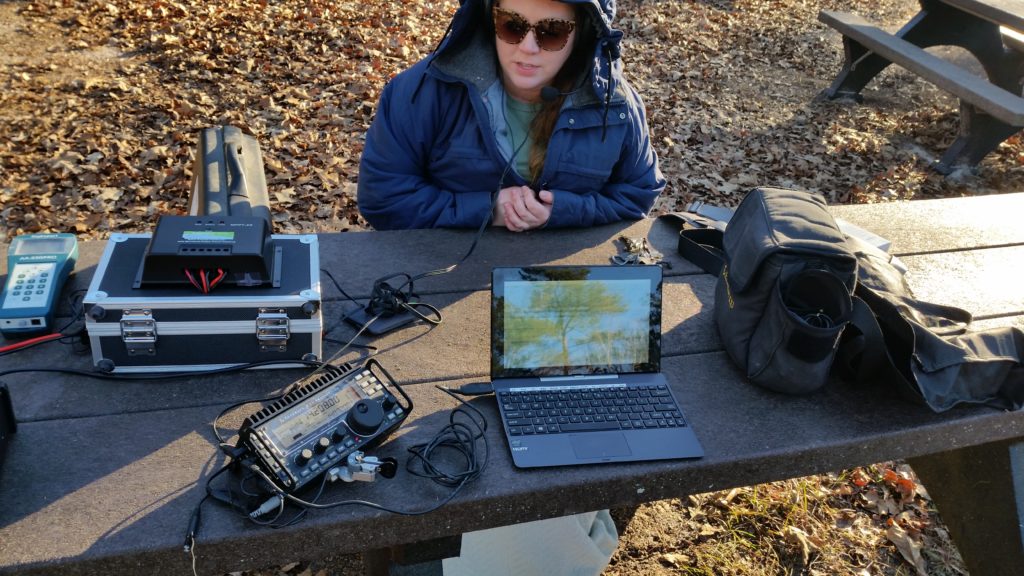 She got a handle on it pretty quickly, so I just let her run and did the logging.  I was planning to try for some CW Qs as well, but we were able to stay busy with Sarah running SSB until it started to get close to park closing time.  Thanks to everyone for the Q’s, Sarah was exhilarated by the action, and we both had a lot of fun!